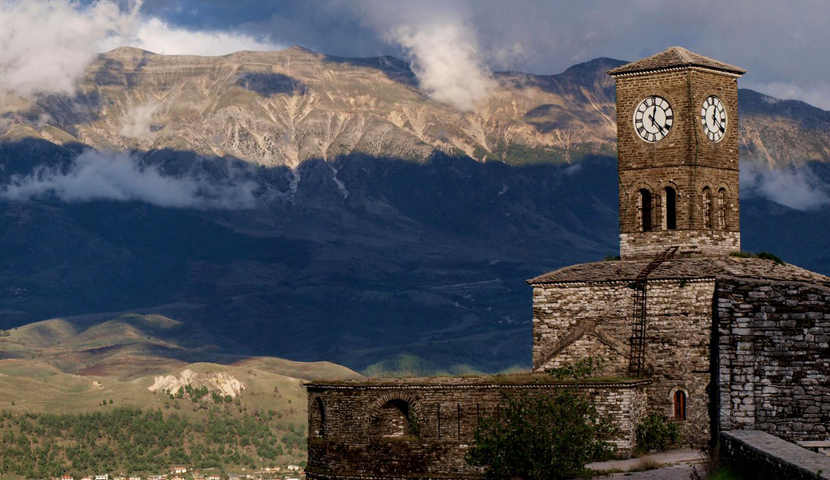 Depending on the arrival time there’s the opportunity to visit the amphitheater in Durres, the Ardenica Monastery or archaeological site Apollonia to break up the 2 1/2h drive to Vlore. It is a calm Adriatic sea-side town with pleasant city beach, famous “xhiro” (evening stroll), savory sea-food and a pleasant family-run B&B to host us.

Short transfer along small coves and the harbor Orikum through the Gulf of Vlore towards the Karaburun Peninsula that forms the Strait of Otronto with Italy. Embedded in a small side valley the village Dukat is the starting point for the first walk. On shepherds path and an ancient trade route that connected the Roman harbour with inland trade towns we ascend in the Fir forest with views of the Adriatic the Shen Gjergj Pass( (1132m) for a panoramic view of the Shushica Valley. The highest peaks of the Ceraunian (“thundersplit”) Range tower above the valley, both Cika (2045m) and Qorre (2018m) impress with their ruggedness. Descent in ancient oak forest on a donkey trail through the deserted village Pirgu to Terbac. Afternoon free to explore the remains of communist buildings.
Overnight in a guesthouse run by a shepherd family that moved here from Pirgu. All meals.

A more relaxed day that can be further shortened takes you from Terbac down into the plain. You cross the turquoise waters of the river canyon and rise again for views of Kendervices (2121m) further inland. Through orchards and light forest the village Vranisht at the foot of Mt Cika is approached. Before continuing the walk you can enjoy drinks at the village cafe. A small trail takes you trough the hills to Kallarat, from the last pass the Shen Gjerg Pass is still visible as well as the slopes of Bogonica that will be climbed tomorrow.
As in all of Kurvelesh’s villages many communist monuments can be found here and the villagers still keep books and pictures of Enver Hoxha.
Swimming opportunity close-by the village, overnight with different families of the village. All meals.

The longest and most challenging walk of the journey starts at the partisan monument, it leads first up to the ruined village, destroyed by Greeks in the first Wold War, and after a long climb further to a series of flat meadows hidden in the mountain side. Two groups of shepherds reside here for half the year, in turns the men take care of the flock, especially wolfs are a constant danger. From highest point at 1400m the panorama stretches from Corfu and the Butrint Lagoon along the Albanian Riviera to coastal town Himare, overloking many of the villages. Also Nemercka (2482m) is covered in snow from November to May is visible and details of the upper Kurvelesh villags can be made out. Walk on the ridge with great views to village Pilur and short transfer to Qeparo, a laid back sea-side village of the Albanian Riviera.
Overnight in a family-run bed breakfast at the beach. Our host is a fisher who according to rumors lost his arm in an accident fishing with dynamite. Breakfast and lunch.

The Bay of Porto Palermo is the only safe harbor between Saranda and Vlora, thus used since ancient times by sailors and of strategical importance so that Ali Pasha constructed a castle to protect it.
Further along the Riviera’s village you travel past the busy harbor of Saranda to UNESCO listed archaeological dig Butrint. A former Greek colony surrounded by lagoon that was recently declared a national park. Swimming break at the islands of Ksamil, one of Albania’s most beautiful beaches, where you can also taste the sea food of the nearby lagoon. Onward transfer with a stop at the “Blue Eye”, a magical icy karst spring before crossing the Muzina Pass and reaching Gjirokaster. The “City of Stone” is birthplace of Enver Hoxha and Ismail Kadare, Albania’s most influential writer, survived the modernization campaigns thanks to its status a museum town and is today inscribed on the UNESCO list, too. Breakfast.

Transfer through the Dropul Valley along Drinos into the Kelcyra Gorge that was shaped by one of Europe’s last wild rivers, the Vjosa.
Starting in the village Peshtan the walk offers views of the two surrounding ranges and forest that still covers much of the area. Highlights are the almost deserted Kala where only one family remains, a large Ottoman stone bridge erected by Ali Pasha and today’s destination Limar, a remote village and prime example of vernacular stone architecture.
Overnight in the guesthouse of the teacher who takes care of the remaining 10 pupils.
All meals.

Southbound the route passes more typical villages of the Zagoria region, offers mountain splendor and views of the namely called river. At one point exists the opportunity to visit a small waterfall at an interesting geological fold. In Hoshteve the church of the Holy Apostle is a true delight and the village bar next bar offers welcome refreshments. The day ends with a short transfer to Sheper, the larger and more modern village at the trail head of the following day’s walk.
Overnight in a simple guesthouse of a Aroman / Vllach family, nomadic shepherds who were forcefully settled in this area during communism.
All meals.

The challenging crossing of the Dhembel-Nemercka Chain takes you to the Dhembelit Pass (1450m). From the village an uphill climb in a crack leads to the meadows where shepherds from as far as Konispol (the southern most point of Albania) have their summer quarters. The pass offers views of the southern highlands, across Greece and to city Permet below. A long descent takes you to Leuse, another beautiful stone village with amazing fresco-covered church.
Overnight either in a guesthouse of the village or in a hotel of nearby (15min walk) Permet. Brakfast and lunch.

On foot you explore the Lengarica Canyon and its many hot springs, visit the tiny village Benje to sample raki and gliko (a sweet and local delight) made by the family we visit and return to the city to see a factory where its produced.
Transfer passed Tepelena and through the coastal plain to the “City of Thousand Windows”, opportunity to visit on-route the most renown winery of the country or one of the optional sights of the first day. Berat is the third world heritage site of this journey and boast a castle with views to Mt. Tomorri (Albania’s Olympus) and picturesque Ottoman old town.
Overnight in a historic building of the often portrayed Mangalemi District. Breakfast.

Price by person:
Please, write us to angel@kasbahitran.com
Includes: All vehicle transfers accomooodation and meals as set out in the programme,a local guide.
Not include: bottle water, plane and tickets to monuments..
Monay: LEK (1000 LEKS about 7 euros).
Documents: ID card or Passport for not european citizens.
>Trekkers walk for 7 to 9 hours a day, with a break at midday for lunch. Local guides accompany us on the trek and during all the travel.